What So Not reveals Anomaly tracklist, shares “As One” ft. Herizen

Anomaly out Sept. 16 via Counter / Sweat It Out: Pre-Save/Order

A shimmering deviation from archetypal electronica, the journey for Australian producer What So Not from his early beginnings to 2022 has been one lined with eyewatering collaborations, countless explosive live shows on some of the world’s biggest stages, and, as of Friday, September 16, two studio albums when What So Not’s transcendent sophomore release Anomaly finally unveils to the world.

Sharing the album tracklist today, What So Not reveals the 11 tracks that will make up Anomaly and delivers (in spades) on the anticipated tonne of top-shelf collabs. And for now, What So Not offers another taste of what lies ahead, with a luminous new track, “As One,” featuring Herizen, released on July 27.

An insatiably airy and gleaming dance delight, “As One,” features What So Not, aka Chris Emerson, alongside some resplendent vocals courtesy of singer-songwriter Herizen. Laden with pulsating beats, ethereal synths, and lush textures, “As One” is ultimately a track that’ll light up dancefloors and all of the feels while also marking the pair’s second team-up after their 2019 jam “We Can Be Friends.” Injecting heartfelt lyricism and dollops of sonic beauty on “As One,” Herizen’s crystalline vocals effortlessly level up the hypnotic and jubilant new tune, a fitting fact given the ease with which the song itself came to life, as Herizen elaborates.

“As One is a beautiful upbeat love song that makes you wanna dance and hold that special someone. When I wrote this song, I had my heart on my sleeve; I was so happy and full; it all just poured out of me that the song pretty much wrote itself. I hope this track tickles listeners the way it does me. I want to leave you with an image: blue skies, light warm summer rain, the smell of the ocean, and that special person holding you tight and your’ hearts moving as one'”.

Chris enlightens, “For some time, this song was just an iPhone recording of the two of us riffing in the house one day. Me on an OP1 synth & Herizen humming melodies. I later showed the recording to DUSKUS, and we quickly fleshed out a tune pretty close to what you hear today. The wonky saw synths on the drop really encapsulate the emotion of this record for me. So euphoric but most of all fun.”

With “As One” acting as the uplifting closer to the forthcoming new album Anomaly, there’s an undeniable sense of poise and precision throughout What So Not’s second full-length album. Equally enamored and inspired by the prevention of the complacent destruction of our existence, accessing your true potential, and how those two themes dovetail into one another, Anomaly also features Chris himself singing (or “belting,” as he puts it) on opening track “Alive” and, in true What So Not style, aligns an army of incredible features from homegrown heroes including DMA’s, Danish singer-songwriter MØ, Louis The Child and, seen most recently on previous single “Mr. Regular,” a sweltering outing boasting Oliver Tree and Killer Mike.

Truly the king of collabs, it’s no coincidence that the meticulous line-up on Anomaly is a prestigious and dynamic roll call from some of the best and brightest from around the musical kingdom, with Chris pursuing ambition and innovation from his collaborators every step of the way and also paying it forward, as he elaborates, “There is so much doubt floating around in this industry, from the labels to the artists own team, the “stats,” changes in trends – we can EASILY doubt ourselves and never see through what could have been our greatest work. For that reason, I always hit up artists that I think are doing something really unique or ahead of the curve. I know people have done that for me and how much it meant. This is how I meet a lot of people and make friends. Often down the track, I’ll write an idea and think: ‘wouldn’t it be cool if such-and-such threw down their sound on this section’ – and a lot of the time, we get magic!”

Pulsating with eclectic instrumentation, fresh beats, and plenty of the textbook What So Not mesmerizing glimmer that has endeared the acclaimed producer globally, Anomaly proves in spades that What So Not in 2022 is truly as enigmatic and rare as his new album name suggests. From the emotive and humid moments of its title track, featuring “AY AY,” to the Underworld-esque slice of indie-electronica that is “The Change,” featuring DMA’s, the sparse charm of the hip hop-soaked “Messin’ Me Up,” featuring EVAN GIIA and glitching bangers like “Black Shallow,” featuring Enschway, Anomaly equally captures the permeating artistry of What So Not while barrelling Chris into a staggering new era, dominantly centered around his own internal and literal explorations,

As Chris shares, “Making Anomaly was an internal deep dive. I sing on the opening track, belted even. I didn’t know I could do that! It just came out of me one day, and I thought: ‘woah, OK…this is the start of the next era’. For that song, in particular, I’d been thinking about the whole thing with Keith Flint after I’d just missed a planned catch-up with The Prodigy on their Australian tour. As well as that, I was also listening to Lil Peep and Underworld. It’s such a strange combo of things, but you can hear it all in there! Many of the songs are from that same period: driving round Europe in a rental, cranking playlists, jumping in the studio with Noisia, Jammer, Explore, Petit Biscuit, San Holo, or going to a jazz club in Paris at 3 am with Anderson Paak & The Free Nationals. I was traveling the world just for fun and recording along the way.”

For over a decade, What So Not has snagged local and international airplay adoration, toured the world, including appearances at the likes of Coachella, Lollapalooza, and Ultra Music Festival delivered knockout remixes of artists including RÜFÜS DU SOL and Run The Jewels while also winning an AIR Award and Queensland Music Award along the way. With his 2019 debut album Not All the Beautiful Things swinging into the charts at #14 in Australia and #18 in America, armed with unforgettable features from Slumberjack, Daniel Johns, Skrillex, Toto, and many others, it’s safe to say expectations were always going to be high for the eventual follow up from Chris under the What So Not moniker. But with Anomaly, Chris stakes his claim once again as one of Australia’s most exciting exports and, undoubtedly, one of the most exciting artists straddling the realms of electronica, hip hop, trap, and experimental music to grace this generation.

Fans won’t have to wait long to experience Anomaly in all its glory and the abundance of shared creative genius on display, with the album dropping in just under two months. And as for the alleged beef with American viral star and Anomaly feature artist Oliver Tree? Here’s what Chris has to say: “This Oliver Tree beef story has been epic and played out way longer than I think any of us expected. The green hair mix-up could have happened to anyone. I’m glad we got it cleared up without anyone following through with the Oliver death threats”. And for anyone who has already caught a listen to “Mr Regular,” it’s safe to say there’s no bad blood – only bangers lying in wait – and the same goes for Anomaly overall. 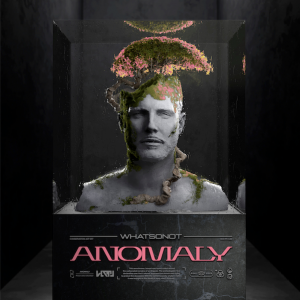