I “Dare You Not to Dance” to Haiku Hands: Interview

See Haiku Hands on their first U.S. tour this March

If you aren’t already listening to Australian collective, Haiku Hands, consider yourself unfashionably late for a much-deserved, sweaty dance party. Don’t believe me? I “Dare You Not to Dance” to their provocative and defiant new single.

Since exploding onto the scene in 2017 with Triple J-favorite, “Not About You” the group consisting of Claire Nakazawa, Beatrice Lewis, and Mie Nakazawa have been on a mission to explore social norms, challenge the status quo, and make brilliant dance tracks to bump as loud as humanly possible.

Now, with the group’s first-ever SXSW appearance and US tour happening later this month, I caught up with Mie Nakazawa from Sydney to chat about Haiku Hands’ latest single, “Dare You Not to Dance,” upcoming tour, and forthcoming debut album.

How are things going in your world today?

Mie: Pretty good. It’s like my first chill day in a while.

Right — you just wrapped up a headline tour in your native Australia. How was it?

Mie: Yeah! It was really great, we pretty much sold out every venue, so I can’t complain.

Was it your first time playing your latest single, “Dare You Not to Dance” live?

Mie: No, we’ve been playing it before that, but it was really nice because people knew the song and were singing along to it on this tour. That was a pretty big difference and I loved it.

What’s been the response to the new single overall?

Mie: Really good! It’s cool because I feel like people were quite shocked — it’s quite different than the other songs we’ve released but it’s had a great response not just in Australia but everywhere. We’re really happy, it’s been really cool.

Does the group have a set process for creating music?

Mie: We all have really different music tastes — but we’ll come together on quite a particular sound, all bring our own flavor to it, and sort of go from there. We do really interesting writing weeks because we’re living in different cities, so we’ll all meet up for a week or something and go through tracks. A lot of our friends are producers, so we’re working with a lot of different people. So, we’ll get their tracks and kind of see if we’ll dance to them or not. That’s the test for whether we’re going to use it or not. Then we all get in the studio and write together for that week and it’s great.

In the past, you’ve worked with Angus Stuart aka El Gusto from Hermitude. Are you all in the studio at all currently?

Mie: The last time we were in the studio was maybe two weeks ago in between two of our headline shows here. We had a week or so in Melbourne where we were writing and trying to finish some tracks. We’re hoping to release an album by mid- maybe the end of the year, so we have some new tracks coming up.

I think we actually made my favorite track so far. It’s really different from the stuff we’ve released. There’s maybe a bit more… yelling (?) I wouldn’t say metal yelling but it’s on the path to that kind of vibe.

So, you’re going with a more hardcore sound for this one?

Mie: Yeah, maybe it’s just therapy for myself. I’m not too sure yet but I like it.

What else can you tell us about the new project?

Mie: All our songs are very different, so that’s why we’ve been going for releasing individual single after single. At first, we thought they all had a life of their own but as we’ve been writing we’ve seen that there’s definitely a link. We’re not entirely sure yet what that link is, but there’s an energy behind the songs which is the same. It’s definitely not a concept album though, it’s probably the opposite to one – whatever that is.

Angus also co-produced your first single, “Not About You.” I remember hearing that on Triple J Unearthed when it first dropped. What’s it like, as an Australian band, to get support from such a massive institution so early on?

Mie: It’s huge — getting the support from Triple J is so massive in Australia. I do hope that other paths pop up for other bands because if people don’t get on to Triple J it can be quite hard to get their music out there.  So, yeah, definitely hoping there can be other pathways for people in the future, but I also do really recognize how much getting onto Triple J has helped us and really appreciate their backing.

I definitely understand. You have a few days off, are you actually getting to chill like you said? You have a busy March coming up.

Mie: Ahh, I wouldn’t say that! We have a film clip that we’re shooting this week. We’re scouting for a location and then shooting at the end of the week, so we’re preparing for that and then getting ready for going to America. I’m quite involved with printing and doing all of our design and merch stuff, so I work quite closely with the printing company. So, I’ll be talking with them and getting some more stuff printed.

You’ll be state-side soon for your first SXSW. What are you looking forward to the most?

Mie: Our schedule is packed once we get there. I haven’t gotten a chance to see who else is playing, but I’m excited about the whole experience. We’re playing three sets on the 12th, 13th, and 15th, so can’t wait for that. We’ve never been to America before, so this is pretty huge.

After SXSW, you’ll be on the road supporting the Japanese band CHAI through March. How would you describe a Haiku Hands show for someone that hasn’t been?

Mie: High energy – a bit confusing. *laughs* Hopefully, really, really, really, entertaining. A lot of people will send us messages after telling us that they have sore legs from dancing or squatting after our gigs. We did a gig recently and we had a group open for us that had never really heard of us, it was a really interesting pairing, because they were like a jazz band, more or less, and they asked what our show was like, so of course, we had to tell them it was a surprise. We saw them after and they told us it was unlike anything they would have expected, so that was really nice. That’s what we’re going for every time. That’s what I want people to say every time.

Will fans get to hear new or unreleased Haiku Hands at SXSW or on tour?

Mie: Yes, definitely. Aside from the song where I get to scream a lot, there are a bunch of new songs coming soon. The first track we released, “Not About You,” got such good feedback that we actually started getting booked for festivals and gigs just from that one song, so we started touring really hardcore and haven’t had much time in the studio. We’ve been kind of making tracks on the go and on stage. Someone will throw out a new lyric and we’ll run with it, so that’s kind of our only time to develop the show. It’s when we’re performing.

What’s next for Haiku Hands beyond March?

Mie: We’re playing six dates of Groovin the Moo in Australia, which is a regional festival and will be a lot of fun. Hermitude will be on that run as well, which is great. Writing, we’ve got a residency booked in, so we have a writing week. Hoping to work on everything. El Gusto and our other writing partner, Joelistics will be there. We’re writing in the middle of the forest, so that’ll be nice. Then we’re back in Europe for a few dates. 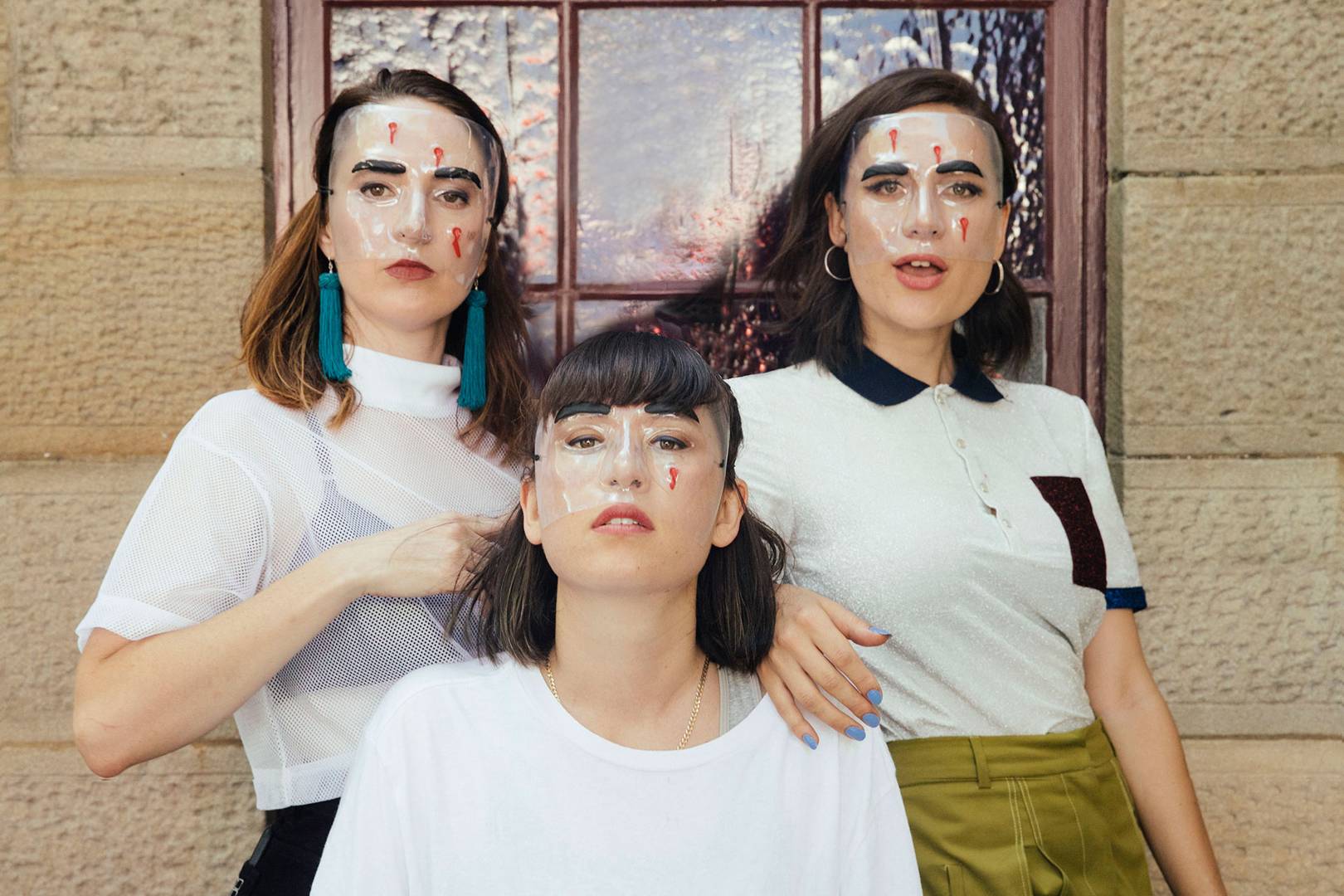 What Australian music are you listening to currently? Any recommendations?

Mie: One of the most solid groups/artists coming out Australia right now is Sampa the Great. She is amazing if you haven’t heard her yet. Then, on a very different style of music, there’s a guy called Willaris K. He’s amazing as well and that’s more electronic/rave music, which I love. He’s sick.

We played at Splendour in the Grass here in Australia and the festival ends at 12 or some early stupid time, but someone was like “there’s a party in a tunnel, get in the car.” So, we pile into the car and went deep into the forest, drove quite far down. We get out of the car, walk down some abandoned train tracks, heard music coming, and go into this tunnel and Willaris K. is playing. It was so fucking good and so dangerous. Everyone’s standing on rocks, train tracks, and on each other’s shoulders. Easily one of my highlights and after I saw him there he’s blown up slightly over the last few months.

Haiku Hands will perform at SXSW on March 12-15 and is supporting Japanese band CHAI on a short run of shows later this month. Dates are confirmed in DC, Brooklyn, Toronto, LA, SF, Seattle, Portland, and more. Tickets are available here.