It’s no secret the Met Gala is one of the most sought after and exclusive fashion invites on the planet.

Now in its 71st year, the annual star-studded event unites leading names in fashion, art, music, and film to celebrate the unveiling of the Metropolitan Museum of Art‘s newest exhibition while also fundraising for the Met’s Costume Institute. This year’s theme was “Camp: Notes on Fashion” and the event was hosted by incomparable fashion legend, US Vogue editor, and artistic director of Condé Nast, Anna Wintour, as well as Harry Styles, Serena Williams, and Lady Gaga.

While Music’s Biggest Night is reserved for the Grammy Awards, last night’s glamorous event, iconic pink carpet, and gaudy theme had superstar musicians from across the globe taking their fashion choices to the next level. While there were a few lackluster choices (sorry, Shawn Mendes/Joe Jonas), here are the ten musicians that slayed the Met Gala 2019 pink carpet.

Just a few weeks after her main stage sets at Coachella, Janelle Monáe once again stunned the masses, this time by wearing a beautiful custom outfit by Christian Siriano to the Met Gala. Complemented by an incredible illusionary stacked hat, Janelle’s dress featured a surrealist-inspired face with a motorized winking eye and absolutely stole the night.

We all know Harry Styles has a longtime love for fashion and Gucci. After touring his debut self-titled album in custom Gucci suits, and bearing his face for Gucci Tailoring, the former One Direction superstar assumed his Met Gala 2019 co-chair duties confidently in an all-black sheer Gucci outfit with beyond waist-high pants, frilled sleeves, a jabot worth more than my life, and mid-heel shoes. Of course, we can’t forget Styles rounding out his incredibly-campy outfit with a single pearl drop earring and painted nails. Take notes, Mendes.

The “Truth Hurts” but May is officially Lizzo‘s month. Just days after releasing her highly-anticipated debut album, Cuz I Love You, the hip-hop/R&B goddess stunned at the Met Gala in custom Marc Jacobs. Donning a pink feathered robe, pink wig updo, and crystal embellishments on her floor-length dress, the rising artist once again established why all eyes should remain on her this year.

Met Gala 2019 co-chair, notorious on-stage outfit changer, and legendary musician Lady Gaga did not disappoint when she finally walked last night’s pink carpet. Wearing FOUR custom pieces by longtime friend and designer, Brandon Maxwell, Gaga’s take on the night’s theme included a 16-minute carpet walk, three outfit changes, and multiple accessories. After entering with a bright pink dress almost longer than the carpet itself, Gaga stripped down to a black balloon-hipped dress before moving on to a skin-tight pink number and sporting an 80’s brick “Telephone.” Gaga then stripped down to her fishnets and jewel-encrusted bra/panties while pulling Joanne–era cowboy hats in a pink and gold Haus of Gaga wagon. Can we scream CAMP any louder? Watch The Guardian’s minute-long video to see the full reveal.

It’s the year of dazzling, priceless diamonds. Months after Gaga donned the iconic 128.54-carat Tiffany’s diamond at The Oscars, superstar musician Jennifer Lopez attended the Met Gala in a shiny Versace gown and a purple sapphire and diamond necklace by Harry Winston – which clocked in at a staggering 129.48 carats. Other notable accessories for the “Medicine” singer included a silver clutch and the best damn legs in the industry. How can these other pop girls keep up?!

While Nick Jonas regretted not wearing a Camp Rock-inspired outfit to last night’s Met Gala, it’s still time for Joe Jonas to take fashion pointers from his younger brother. Accompanied by his gorgeous wife and actress, Priyanka Chopra, the pair astonished the sea of photographers and attendees in their amazing Dior outfits. Priyanka wore a multi-colored Haute Couture gown created for the occasion by Dior Creative Director, Maria Grazia Chiuri, while Nick wore a men’s suit from the Winter 2019-2020 collection, designed by Dior Men’s Artistic Director, Kim Jones. Both complemented their outfits with dazzling diamonds, silver earrings, and custom shoes for the occasion.

Céline Dion may be stepping away from her iconic Las Vegas residency to cross the globe on her upcoming “Courage” Tour but the Canadian singer brought a bit of Vegas flair to last night’s Met Gala. Wearing a form-fitting champagne-colored Oscar de la Renta bodysuit and feathery headpiece by Noel Stewart, the Canadian songstress wowed in her fringed outfit while maintaining her signature light-hearted and playful demeanor.

Grammy Award-winning artist Cardi B is no longer the Met Gala musical newcomer. After last year’s amazing Jeremy Scott-created outfit, the “Please Me” singer returned this year to wow in a custom curve-hugging Thom Browne gown. The burgundy piece featured feathery shoulders, a massive rounded train, and was worn with a headpiece that covered the singer’s hair.

Someone locate Sia because we just found the perfect chandelier. While everyone is talking about that one Katy Perry/Jennifer Lopez bathroom run-in at last night’s Met Gala, Katy Perry‘s first outfit of the night (before putting on a hamburger suit) was an outlandish, campy chandelier creation by Moschino. In addition to her crystal-encrusted dress and heels, the “365” singer’s dress had functional lights, draped crystal beading, and was worn with a chandelier headpiece.

The British beehive is back and fuller than ever. Attending her first-ever Met Gala, “New Rules” singer Dua Lipa looked like a total natural in her vibrant, multi-colored satin dress and heels by Versace. The dress had puffed pockets and was worn with a headpiece dripping in jewels and matching leggings. 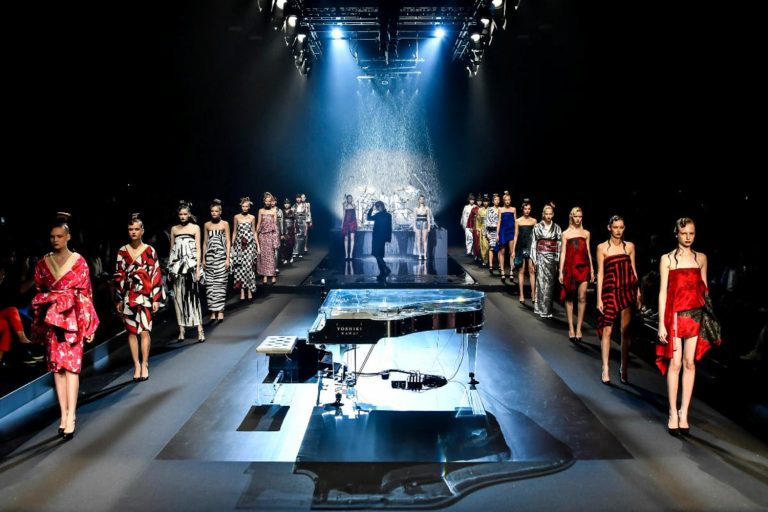