Kicking off on May 26 in the U.S., customers can enjoy the BTS Meal, which will include a 10-piece Chicken McNuggets, medium fries, a medium Coke, and for the first time in the U.S., Sweet Chili and Cajun dipping sauces inspired by popular recipes from McDonald’s South Korea.

In addition to new sauces stateside, the BTS collab is truly special as it’ll be the first McDonald’s celebrity signature order available internationally. With nearly 50 countries anticipating the release, the Golden Arches has unveiled plans to make the meal available on different dates through June. See the complete list of participating countries and availability below. 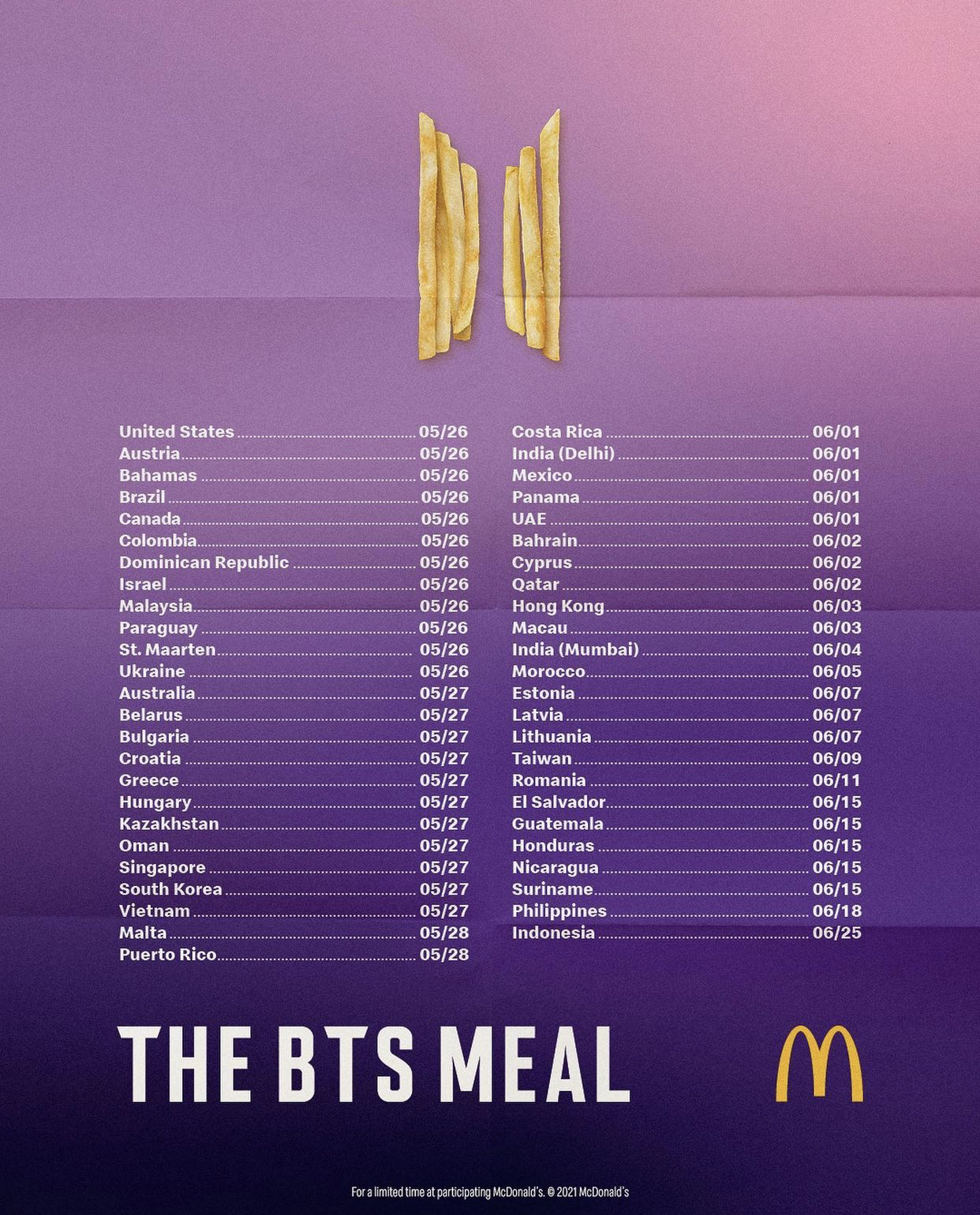 Following highly successful collaborations with Travis Scott and J Balvin, McDonald’s latest partnership is already sparking mass excitement and some sorrow for fans unable to order the meal in their respective countries. With over 25 million monthly Spotify listeners and a devoted “Army” fanbase, many online have already reacted to today’s news. See a few of the reactions below.

john cena at mcdonalds asking for the bts meal with a jhope photocard pic.twitter.com/asOhgUw56O

me telling my 7 year old sister “just come with me to mcdonalds and say you want the bts meal” for the third time that day. pic.twitter.com/wgXzjCZA38

Previously they collaborated with Travis Scott and J Balvin for a similar limited-edition celebrity meals and these are the ads.

armys meeting up at McDonalds for the bts meal: pic.twitter.com/geQQzmWJ7v

the workers hearing someone wants the bts meal for the 92829282th time today pic.twitter.com/Tg5P1hCXfb

me eating the bts meal like i aint never had mcdonalds fries before pic.twitter.com/e2r0MsCvgz

‘get in loser we’re going to mcdonalds to get the bts meal’ pic.twitter.com/9yzwx73097

Me at McDonald’s enjoying my 10th BTS meal for the day pic.twitter.com/8Xsyj5itC5

Me leaving McDonalds and realizing that they forgot to give me my photo cards 🏃🏾‍♀️💨#BTSmeal #bts #McDonalds @bts_bighit pic.twitter.com/qqfJh9Qxgo

To celebrate the news of the BTS x McDonalds collab here’s something a lil fun while I’m on my lunch break:

McDonald’s u better be prepared to restock photocards and Oreo mcflurry#TheBTSMeal pic.twitter.com/2LMFPnV3ub

By requested here are the McDonald’s dipping sauce which will be featured in the #McDonaldsXBTS Meal coming out in May. #TheBTSMeal @BTS_twt pic.twitter.com/IZ2o6EhPTv

Hey @McDonalds, you better add more countries in the @BTS_twt Meal deal because it seems like 50 countries is not enough…..

U.S. customers will be able to order the BTS Meal in-restaurant through contactless mobile order and pay in the McDonald’s App, at the Drive-Thru, or via McDelivery. So mark your calendars for May 26, and be sure to keep an eye out on McDonald’s social channels (@mcdonalds) for regular updates on the collab, including even more surprises in the coming weeks!