It’s a quiet and sunny countryside afternoon when I connect by phone with Holly Humberstone.

Just outside of Nottingham, Holly finds herself, like many, self-isolating during an unprecedented global pandemic. The serene setting is a stark contrast for Humberstone after just touring Europe with breakout star Lewis Capaldi – a multi-date run culminating in two sold-out shows at Wembley Arena.

While recognizing it’s a weird time for everyone, Holly reflects on the significant journey with creative optimism. “Such a huge tour just makes me want it for myself… my own headline tour.” Though London-based, she’s currently back in the home that raised her, with her beloved piano and sisters that inspired her debut single “Deep End.”

At just 20 years old, the multi-instrumentalist is undoubtedly just getting started. Days after wrapping with Capaldi, the promising artist released “Falling Asleep At The Wheel,” a song that experiments with a fresh soundscape and layered vocals. “It was kind of the first time I’ve really known who I am within the music I was making and the direction I wanted to go in,” she shares about the dark-pop track.

The March release, which she performed last year at Glastonbury, captures the heartfelt vocals and poignant lyricism quickly characterizing her music. Clearly on the verge of a breakout year, our call finds Holly just steps away from the backdrop of her first two music videos, but with sights set on a boundless future. Not only for her next single — which should be arriving in the coming weeks and may include a self-directed video — but also her first and second EPs.

While rewarding her strong quarantine work ethic with binging Arrested Development,  learning French on apps, and watching Studio Ghibli films, she’s bubbling with excitement over what’s to come next, and so is anyone else already hip to this quickly rising star. 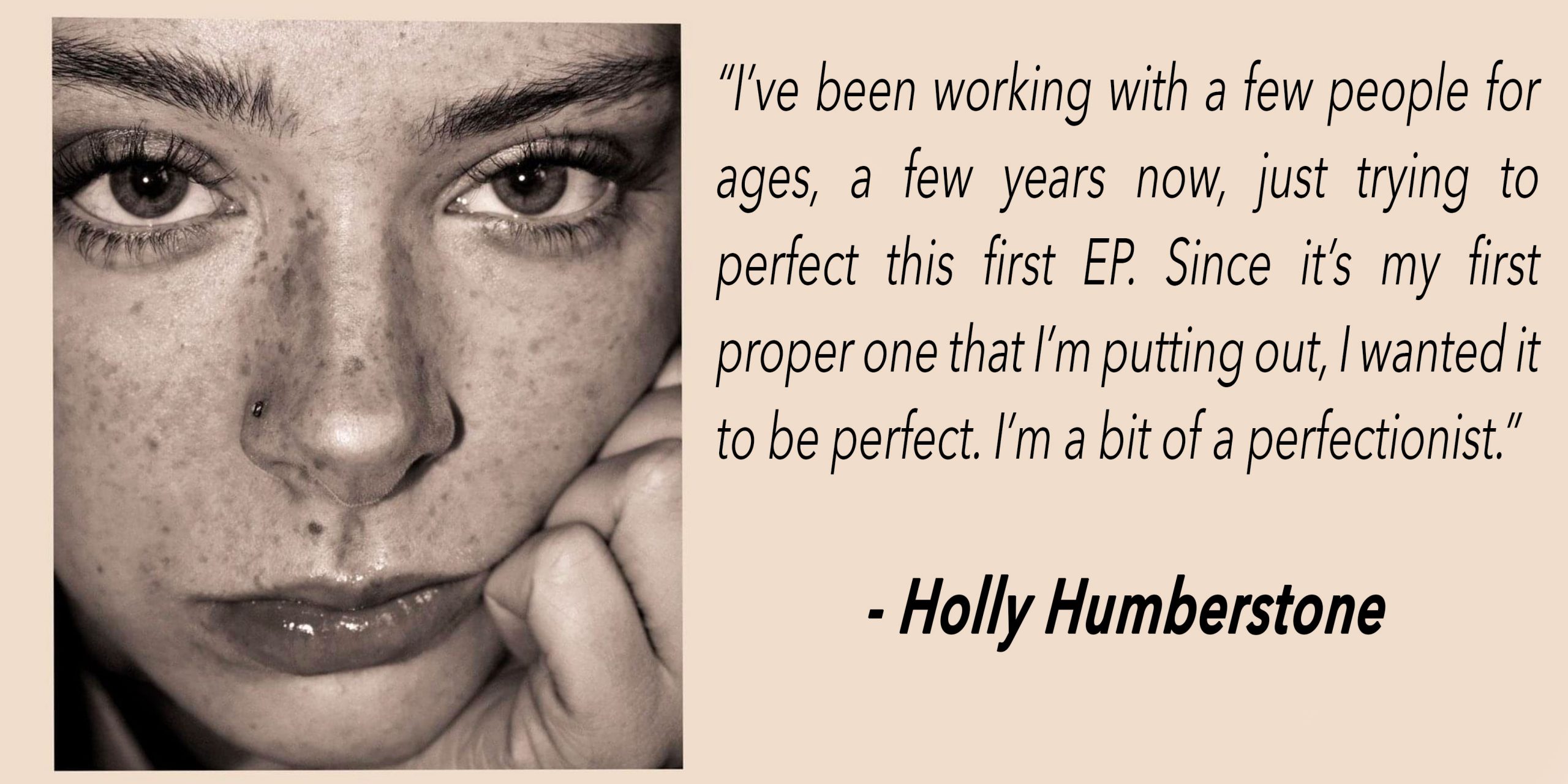 When did you first get into songwriting and creating original music?

I used to have piano lessons and music lessons when I was little. My parents are quite musical, my dad loves poetry, and my mum is a really good cellist. They don’t do it professionally, but they love it and are keen on it. My sisters and I had music lessons when I was really small, and then I was just writing songs. They were just really rubbish, obviously, songs when I was really small. I just kept writing and never really stopped. Didn’t think about doing it, it just kind of happened quite naturally. I uploaded a few of the demos I did on my own to BBC Introducing, and from there, I got heard by my manager Josh. It’s all been cool from there.

So far, we’ve heard two official singles, “Deep End” and “Falling Asleep At The Wheel.” Why did those songs feel most appropriate to release first?

“Deep End” I wanted to release first because it was a personal one for me. I wrote it last summer with a few of my friends, and at the time when I wrote it, one of my sisters was going through a really tough time with her mental health and was struggling a bit. It’s not always the easiest conversation to have with someone. If someone’s on your mind and you want to help them and just let them know you’re there for them, so I guess this song was my way of sort of telling her, “I’m here for you.” I was supposed to put out “Falling Asleep At The Wheel” first, but then we wrote “Deep End” and realized that seemed to just make a bit more sense to come first. It’s just so personal and true to myself.

“Falling Asleep At The Wheel” came second, and I feel like sonically, it’s sort of really me. It feels organic. When we wrote it, it was kind of like the first time I’ve really known who I am within the music I was making and the direction I wanted to go in. So it also made sense to put it out second as well.

“Falling Asleep At The Wheel” definitely feels like a sonic push forward. How do you think this release best captures your growth as a musician?

I wrote it with my friend Rob, who lives close to my parents in Nottingham, and the house I grew up in, which is where I’m quarantining now. It’s in the middle of nowhere and its remote, kind of falling, really old, and characterful. We had a week where Rob came over to my house, and we set up a mini studio in one of the rooms, and we wrote it. So I feel like that’s why it feels so organic to me. I’ve also always loved dark-pop, people like Lorde and Phoebe Bridgers. I feel like you can sometimes hear the weirdness of the house within the track — it was a cool one.

You also filmed both of the music videos in your hometown as well?

Yeah, we did. I’m about 20 minutes away from the nearest town. I’m really in the middle of nowhere, or at least it seems like that. So we just had like two small teams come out and just wanted to film sort of low-key videos, kind of simple.  We filmed “Deep End” right outside of my house, and my three sisters are in the video as well when it zooms out, which is quite nice since its a song about them.

Did you play “Deep End” for your sisters before releasing it? How did they react?

Yes, of course. I remember I wrote it, it was later on in the summer, and I came home. One of our family friends was having a party, and we were there, we were all a little bit drunk, and I played it for them, and they were all emotional. I think they were flattered by it, so that’s good. I wouldn’t want to release something so personal if they didn’t approve.

You’re also currently working with Rob Milton on your debut EP. How’s that coming along?

It’s going well, actually. A lot of the songs we wrote a little while ago, maybe last year, and yeah, there are a few songs that I’m excited for people to hear. I think every song on the EP, I’m just really happy with. It’s taken a long time, I’ve been working with Rob, my manager, and a few people for ages, a few years now, just trying to perfect this first EP. Since it’s my first proper one that I’m putting out, so I wanted it to be perfect. I’m a bit of a perfectionist. So yeah, I’m really happy with every track, and I think it’s been finished for a while now, so I’m thinking about EP two already, I’m just excited to put stuff out.

I saw online you already had 15 unreleased songs, so it’s refreshing to hear you’re already thinking about EP #2.

I think especially with weather like this, it’s kind of an inspiring time, apart from the current pandemic, for me. It’s sort of a perfect time to get some writing done on my own and have a bit of time to think about songs I want to put out. It’s an exciting time for me, musically.

Will we get to hear another official release off the EP soon?

Yeah, I think I should be releasing the next track either later this month or early next month. I’m so excited to put more stuff out.

In the past few weeks, you’ve shared a few unreleased songs like “Overkill” and “Bed Sheets.” Will any of these make it on the EP?

So “Overkill”… I’m not sure if I’m allowed to say this, but I might as well tell you. *laughs* “Overkill” is going to be one of the ones that will be coming soon for EP #1. I’m not sure if “Bed Sheets” will make it for EP #2. I’m not sure. I’ve got loads of songs that I’m wanting to put on the EP. I always write. The last song I wrote is kind of my favorite, so I’m always getting bored with old songs. I’m excited to release “Overkill” for sure, that’s probably my favorite one. It’s just loads of fun, I think, and I had the best time writing it.

Have you started conceptualizing a music video for “Overkill”?

I’m trying to work it out; obviously, with what’s going on at the moment, it’s hard. I won’t be able to get a crew out here. I’ve got a little old film camera, and I’m thinking of trying to film something from home on that. It could be kind of fun to do something a bit different since the two videos I’ve put out are kind of similar. I want them to be kind of in the same world, but this might be kind of a homemade video.

When you aren’t creating music, how are you keeping busy?

I can work hard and write songs for a lot of the day, but I have to have done that to be able to just chill. I also just love chilling and not doing anything, so I love just binging Netflix shows. At the moment, I’m binging Arrested Development, which is so funny. I love cartoons, as well. So I love Adventure Time at the moment, obviously because it’s perfect, and I love Studio Ghibli films. Do you know them?

Yes, love them. What’s your favorite?

That’s a hard one, but I would have to say Castle in the Sky, but they’re all really good. I’ve also always wanted to learn French, so I downloaded some apps, and I’m trying to teach myself French. Which is nice because it’s something I’ve always wanted to do and now have some time.