Shadowglow is out August 19 via Dualtone Records: Pre-save

Highly cinematic, like the song that leads the haunting conclusion of a film into its credits, flipturn today releases “Space Cowboy,” the final single before their debut album Shadowglow is released on August 19. The band today also announces their signing with Dualtone Records. After growing a formidable grassroots fanbase and amassing over 50 million streams on Spotify alone as an independent band, their upcoming album will continue to push the band further.

Following a striking instrumental intro, Space Cowboy’s lyrics come through like a muffled call home from far away. Depicting an individual floating away, isolated by unfulfilled longing and crushing pressure, the song narrates a true sense of emotional weight and looking for “something more.” Moving into the apex of the song, the band unleashes absolutely everything they have to give emotionally and musically, inciting a hollow feeling of awestruck bewilderment.

“When we were writing this song in Arizona on our first writing trip for the record, we kept talking about how it felt like it was somebody getting lost in space,” said guitarist Tristan Duncan on today’s single. “It’s very much a tumultuous experience of said space traveler being ripped away from civilization and life as they knew it; being thrust into the cold clutches of space and their own thoughts. We were also loosely inspired by Watanabe’s Cowboy Bebop and the overarching romanticism of loneliness and aching for something more.” 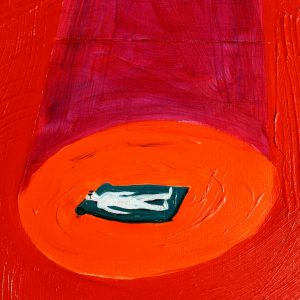 Along with the upcoming release of the band’s debut album comes the Shadowglow Tour. Currently underway, the tour will run through the rest of the year, moving from coast to coast. Tickets for all shows are on sale now; all tour information can be found here and below. Mainstays of this Summer’s festival circuit, flipturn also has an upcoming performance at Lollapalooza, giving fans plenty of opportunities to experience the magnetism of a flipturn live show. Following their debut album release, the band will be putting on their own curated festival, Playground Music Festival, in Gainesville, FL – one of the cities that was deeply important to their formative years as a band.

So far, flipturn has released “Playground,” “Halfway,” “Brooklyn Baby,” “Whales,” and now “Space Cowboy” off of their upcoming album. These releases have been praised by Consequence, V Magazine, AltPress, and EARMILK. The singles have also found their way onto Spotify’s All New Indie, undercurrents, Modern Eclectic, Today’s Indie Rock, Ultimate Indie playlists, and over twenty thousand independent playlists.