It’s happening! Lollapalooza has announced its 2021 lineup, and I am so ready for an unforgettable weekend in Chicago’s stunning Grant Park. Truly, it’s hard to believe it’s been nearly two years since I got to experience my first Lolla, but after a year of watching throwback highlights from home, July 29th – August 1st could not arrive soon enough. So if you’re somehow on the fence, here are Five Reasons to Attend Lollapalooza 2021:

The 2021 Lollapalooza lineup makes up for the lack of a Lollapalooza 2020. The headliners include Miley Cyrus, Tyler the Creator, Foo Fighters, Megan the Stallion, DaBaby, and Post Malone, and that is only one-fourth of the headliners. Check out the full lineup below, and you’ll understand the #1 reason why Lollapalooza 2021 is the must-attend event of the summer. 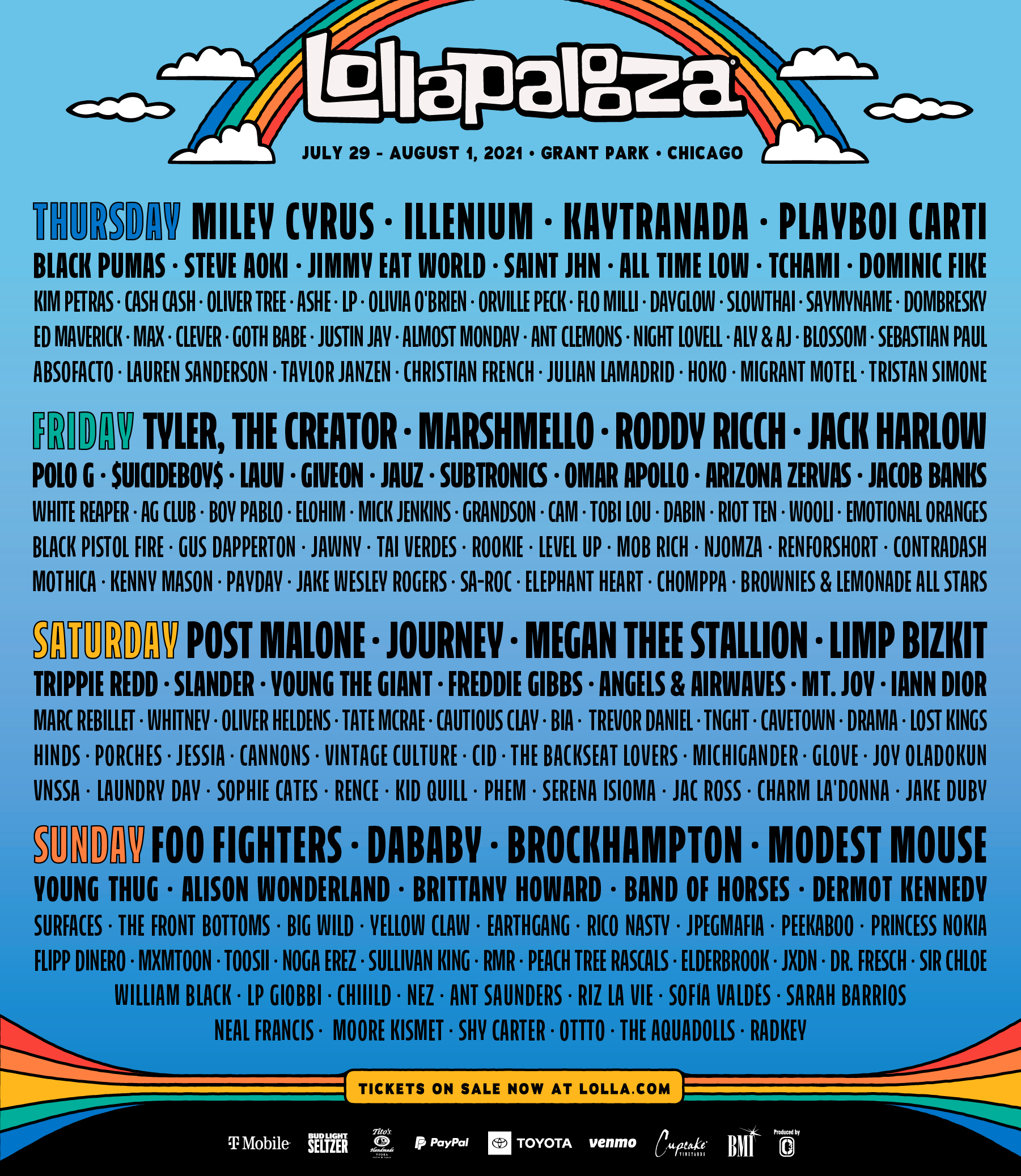 Some of the acts we are excited to see each day include:

On Friday, we see Tyler the Creator, Marshmello, Roddie Rich, and Jack Harlow. Some of the extremely talented acts playing before them include Suicideboy$, Jauz, Subtronics, Omar Apollo, Elohim, Riot Ten, and Level Up. Brownies and Lemonade will also be having an all-star set this year, which always brings out the best vibes.

Saturday brings out the best of rap, r&b, and hip hop music, with both Post Malone and Megan Thee Stallion headlining alongside Journey and Limp Biscuit. Some of the highlights for earlier in the day include Trippie Redd, Tate McRae, Slander, Young the Giant, Iann Dior, BIA, and CID.

Lollapalooza ends at 10 pm each night, Thursday – Sunday, so attending an after-party keeps the party going all night long. With so many iconic venues in Chicago, and as the home of House music and the Blues, the aftershows are the ultimate way to experience Chicago’s nightlife while enjoying the lineup.

Pro-tip: If your favorites are on simultaneously during the festival, but playing an after-party, grab tickets to the after-party! It’s a good way to see both and likely one in a more intimate venue setting after hours. 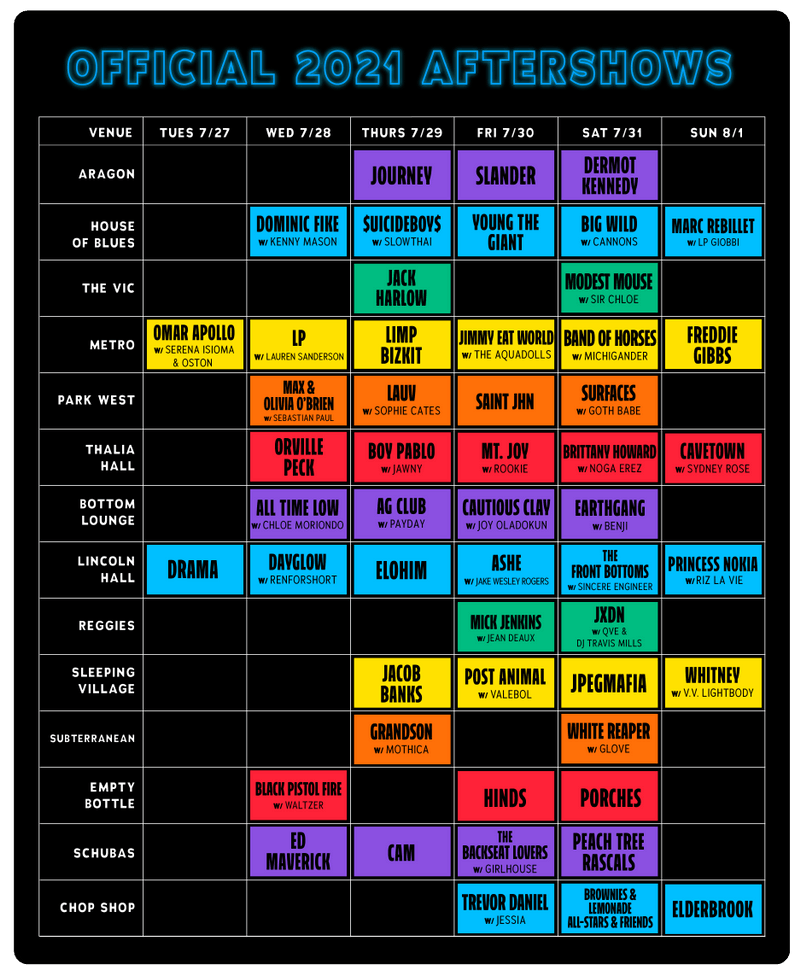 Taking place in Chicago’s sprawling Grant Park, Lollapalooza is idyllic for a true city festival experience. Right in the heart of downtown, attending the festival means seeing your favorite artists with stunning views of the city that invented the skyscraper, creating a truly unique experience for absorbing this one-of-a-kind city. After a long year of lockdowns, quarantines, and canceled shows, I know the squad needs new group festival photos. Where better than Lollapalooza? The iconic Buckingham Fountain, Lollapalooza sign, or any of the various city scenes will serve as the perfect backdrop in between seeing the festival’s unbelievable lineup. Step out, be social, and feel the best energy Chi-town has to offer this July at Lollapalooza.

Attending Lollapalooza essentially gives you front-row seats to the Buckingham Fountain and Cloud Gate (AKA The Bean). Though the Bean is not a part of the festival, it is at the far end of Lollapalooza so that you can check it out before or after the festival. When I first attended Lollapalooza in 2019, I walked from South Loop to the bean as I took in Chicago’s unique and ever-fascinating city sites. Some of the city landmarks and art pieces that I encountered along my stroll were the 116 Agora statues, the John Alexander Logan Monument, the Formal Gardens, and eventually The Bean itself.

If you have a chance to arrive a few days early or stay a few days after, enjoy everything that Chicago has to offer, including the stunning views on the Chicago Riverwalk and recently reopened Navy Pier. You can also enjoy one of the city’s twenty-four beaches and various museums.

Lollapalooza brings the city to you in the best way; its food vendors! Chicago is known for its delicious deep-dish pizza and signature-style hot dogs, and the festival is equipped with city streets lined with vendors ready to serve up the best bites. Of course, Chicago also has an incredible food scene, so if you get to the city early, you need to venture out.

For starters, the most locally-respected traditional deep-dish pizza spot, Lou Malnati’s, is a must-have. If a delicious hot dog or fried chicken is on your bucket list, head to Devil Dawgs for a hot dog you’ll never forget and to Lincoln Park for the Mother Clucker at Cluck It. Some other great local spots are:

Billy Goat Tavern: Pop culture and sports fans alike will get a kick out of this historic location. Tucked away in Chicago’s underbelly on Lower Michigan Avenue, the cheeseburger bar was famously the subject of SNL and John Belushi’s Olympia Cafe sketch. The restaurant’s founder William “Billy Goat” Sianis, was notoriously involved in the supposed “Cubs Curse.” With a delicious bite, unbelievable location, and decades of history, this is a spot you can’t miss while in Chicago.

Jojo’s Shake Bar: In River North, JoJo’s is cranking out some of the most outrageous shakes known to man. They are topped with anything from full ice cream sandwiches to cookies, candies, and s’mores. The shake is guaranteed to be bigger than your head.

Big & Littles: For a casual bite to eat that will have grease dripping down your forearm, Big & Littles is the go-to local destination. Their menu is a vast one that includes tacos (seafood, meat, vegetable, and poke style), sandwiches, burgers, po’boys, fried seafood, wraps, and more.

DMK Burger Bar: Guy Fieri is a proud fan of the DMK Burger Bar; with burgers of ANY kind and a topping spread that would impress Bobby Flay, this is a great spot for a post-festival bite to eat. DMK Burger Bar has the best gourmet burgers for an affordable price in the area and a happy hour with a full bar, so whether it is before or after the festival, this is a must-try eatery!

Be sure to purchase your Lollapalooza tickets soon, as tier one for many of the options is already sold out. See more on Soundazed.