While first luring millions with his guitar-led song covers and hilarious YouTube videos, it was Gray’s 2018 debut single “Idle Town” that would be the crucial catalyst for his burgeoning musical success. After going viral, the now 20-year-old would link up with LA-based producer Dan Nigro to finalize his Sunset Season EP. The debut effort was led by the massive pop anthems “Generation Why” and “Crush Culture” and further established Conan Gray as one of the next major Gen Z pop stars.

Now, after a year that has already seen the young star make his television debut on Late Night with Seth Meyers, open for Panic! At The Disco on their sold-out arena tour, and sell out two headline tours across North America and Europe, Conan Gray is gearing up to release his major debut album and it’s going to be a “darker, chaotic” pop smash.

I caught up with Conan Gray moments after he commanded Lollapalooza’s main stage with a high-energy performance – to discuss his latest single, “Checkmate,” the upcoming “Comfort Crowd” era, his debut album, Studio Ghibli, touring, and more. Read on below for the full scoop.

You just stepped off the Bud Light stage here at your first Lollapalooza. What are your impressions of the festival?

Honestly, when I go on stage I feel like I blackout and don’t really remember what’s going on. I remember the crowd looking massive, it felt like it was never-ending. Also, it was really damn hot and no one mentally prepared me for how hot it was going to be. Everyone was going absolutely insane – it felt like a dream – and I’m really not sure how this is even real life.

During your set today, you played your new single, “Checkmate.” Tell me a little about the track.

That’s a song that I wrote about a person that I really really liked but they were always playing games with me. Like, all the time. So with this song, this was my way of saying that if you want to treat love like a game, I’m going to win it. In a way, it’s also my final straw — like I’m tired of you fucking with my heart. Either date me or leave me the fuck alone. 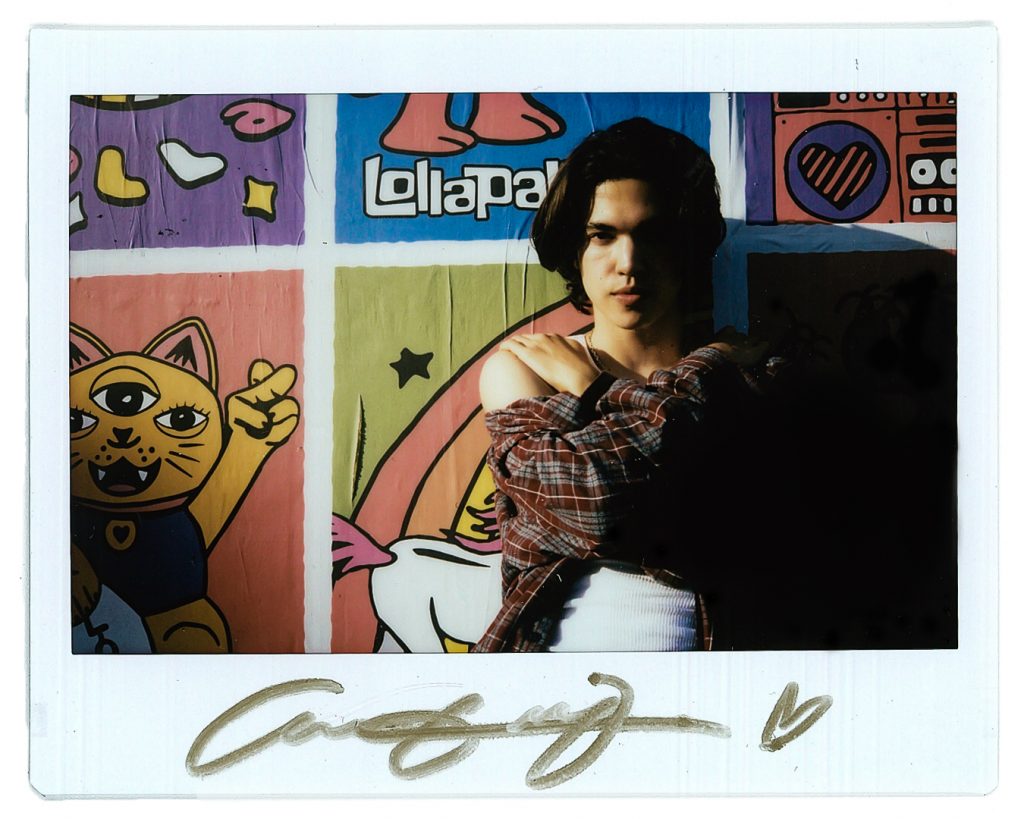 You just released the video for the track last week and it’s a little dark. How involved were you with the concept?

It is a little dark, thank you! *laughs* I wrote the entire concept myself. With everything I do, I’m extremely hands-on just because I enjoy doing it. I wrote the entire video — directed, edited, and colored my last two videos as well. I just love to do it, I feel like I’m a musician and singer because I love the process of making this stuff and everything else is just an interesting side effect. I love to create and I’m very hands-on. Almost annoyingly so.

Your last two singles, “The King” and now “Checkmate” make multiple references to Chess. Is this an ongoing theme for a larger upcoming release?

I think there’s definitely speculation and I feel like I should let people speculate what they want. I don’t want to ruin anything for anyone, ya know?

When you’re making music, do you normally start with a melody or a line? What’s your process?

Always the melody. I come up with a line just out of — I don’t know, they just come randomly. I’ll be like taking a shit or something and it’ll suddenly come to me and then I sing into my phone to try to get it out as much as possible. Once I get the line out, then I usually finish the song out on guitar. It’s fairly quick for me — I wrote “Checkmate” in like five minutes. Songs just vomit out of my face and then they’re done.

It’s interesting you say that since your lyrics seem more dense than whimsical.

*laughs* Definitely. I think I also come up with ideas, word vomit it all out, and then I’ll go back and pick everything apart so intricately. It’s interesting to see how fast a song happens for me sometimes because I think once a song unfolds for me, I’m finally saying something that’s been on my mind for a long time. I’ll finish a song and then finally realize how I was a feeling during its creation. Like it all finally makes sense.

With your new music, how do you feel your sound has developed?

I think overall the sound is getting a lot darker. I think when I was younger, I was a little scared to share when I wasn’t okay. I was afraid that people would judge me or feel worried about me and I just didn’t like the attention. The older I get, the more I realize that people are very multi-faceted and it’s an extremely necessary part of the human experience to feel sadness and to be able to talk about it and feel it through music. I think the album overall is a lot darker but it’s also just a lot. It’s just a lot and chaotic, I don’t even know how to categorize it but I’m having an amazing time writing it.

You have a single called “Comfort Crowd” coming out soon. What can you tell us about it?

“Comfort Crowd” is a track I’m really excited about. It’s currently unreleased but I like to sing it on tour because I think it really summarizes the way that I’ve felt the past year. With everything that’s been going in my life, I’ve been feeling really isolated — not necessarily in a bad way. It’s just all a weird experience since I was expecting to go to college and pursue that path. “Comfort Crowd” is about admitting that you aren’t doing well and need some friends around to help and pick you up. Friends are everything to me, so it’s just a special song.

The coinciding Comfort Crowd Tour kicks off in October. What’s your favorite part of tour life? What’s the hardest part?

My favorite thing is definitely being able to go to a different city every day and like meeting all of the people. I love to tour — it’s my ideal state because it’s super busy. You’re following a strict schedule but it’s different every day. You meet all of these amazing people and it’s everything to me. The hardest thing for me is probably not being able to see my friends back at home but I think I’m pretty good at keeping up with them on FaceTime and whatnot.

What’s next for you beyond touring this fall?

I’ll be touring a lot. Definitely going back around to places I’ve been before and seeing a lot more of the world as well. I’m always writing and mainly I’m just trying to get my album out as well. I’ll release a couple of singles before then and keeping up with what I enjoy doing most – making stuff.

For someone who’s constantly on the go, how do you unplug?

I think it’s my friends that force me to unplug. If it were up to me, I would literally be on my phone all the time. My roommate is always like, “get the fuck off the phone, you’ve been on it for 4 hours.” My best friend back home is always stopping me as well. I think also it’s really good for me to get out of the house. I really like playing tennis, running, painting, and writing songs. Most of my offline time just goes to writing songs.

Do you watch Studio Ghibli movies at all? Wanted to know if you had a favorite.

I grew up in Hiroshima, Japan for three years when I was younger, my dad was in the military. So, those movies literally raised me. Also, they were horrifying! When you’re little and watching Spirited Away, it feels like a horror movie unfolding.

Right? But you learn so much about human nature in those films.

You really do and the animations are so so pretty. Those movies also have extremely alternate deep meanings that you don’t necessarily understand until you’re a little older. I love it.