Man On The Moon III: The Chosen is out December 11th on Republic Records

On Friday, Kid Cudi is finally sharing the third installment of his legendary Man On The Moon series, Man On The Moon III: The Chosen. Has it really been ten years since the last? Unveiling the tracklist today, Cudi returns with a hefty 18 songs, including unmissable appearances by Pop Smoke, Skepta, Phoebe Bridgers, and Trippie Redd.

Not to mention, acclaimed director Nabil [Kanye West, Kendrick Lamar, Frank Ocean] helmed the music videos for “She Knows This” and “Heaven On Earth” — set to be unveiled soon. See the album preview and tracklist below.

Not having released music since 2018s KIDS SEE GHOSTS EP alongside Kanye West – Kid Cudi surprised fans earlier this year with “Leader of the Delinquents,” his first solo single in four years. He also topped the charts alongside Travis Scott with the collaborative project and track, “THE SCOTTS,” and recently released a non-album song with Eminem. 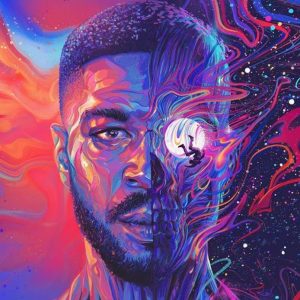